Reading and writing are not simply opposite sides of the same coin. As was examined in the Simple View of Writing, transcription, especially the mechanics, is a set of processes exclusive to writing.

This is one of the reasons that fluent writing can escape so many if not taught and practised well.

If you were to give a child a sword, you would take great care to teach that child how to use it wisely. You would teach them how to hold it, so that not only would they be comfortable, but so that they would be able to wield it more accurately and for longer periods of time. You would teach them the best way to stand, where to have their feet, shoulders, head and hands for optimal wielding. They say the pen is mightier than the sword, yet similar tuition in penmanship is falling out of favour in modern education.

It is common to see unconventional pencil grip and poor posture in classrooms the world over. It is also notoriously hard to correct this once it has been established.

There are also some who would question the importance of good grip and posture, especially if the child can produce well-formed letters, but we have to consider stamina and pace too. If grip doesn’t interfere with that, then definitely it’s not something we would spend too much time on. It’s not often the case though.

Similarly, if a child has to make a certain amount of effort to form letters well on a page, then transcription has not reached the automatic stage. This will affect written output. Grip and posture are key elements to building automaticity.

Before a child even reaches school, they will have begun to develop the larger, gross muscles closer to the core that then develop the finer, more distant muscles. Development of those muscles then lead to postural control, shoulder stability, arm strength, wrist stability, hand strength and finally finger strength and dexterity.

That ongoing developmental continuum can be enhanced or impaired depending on how explicit initial instruction is, how well understood and internalised the language around writing is and the degree of quality that subsequent practice takes.

Explicit instruction in grip and posture, and subsequently in letter formation, would be successfully done by teachers if they show how to sit at a desk and hold a pencil comfortably every day before any writing task.

Want some quick and easy tips for explicit handwriting?

Students should aim for three 90° angles when sitting at a desk for writing.

First at the hips, second at the knees and third at the ankles. The head is a heavy thing. It contains a dense skull and a great big meaty brain. If the spinal column isn’t straight, bodily discomfort is sure to follow.

Thumb and forefinger are the main controllers.

Not too close and not too far away from the end point.

All action done by fingers. Not wrists, not elbow, not shoulder. 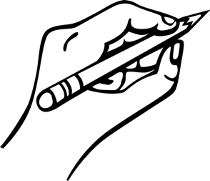 Letters that begin with circles: gross to fine